The Top 10 Most Dangerous London Boroughs – Updated for 2022

Here at Churchill, we’ve been ranking the top 10 most dangerous boroughs of London since 2016. It’s safe to say that we love a good crime ranking. Knowing the crime stats in your area can help you protect yourself and your business from crime, as well as help you decide what security measures you need.

For this year’s ranking, we’re using the most recent data that’s available from the Met Police, looking at data from November 2020 to November 2021. By ‘most dangerous’ we mean the areas with the highest crime rate. Rather than rank areas in terms of the total number of crimes committed, we’ve looked at crime rates in proportion to the population for each of the 12 boroughs in London – ranking them based on the number of offences committed per 1,000 people.

So, let’s jump into our ranking of the most dangerous London boroughs updated for 2022. 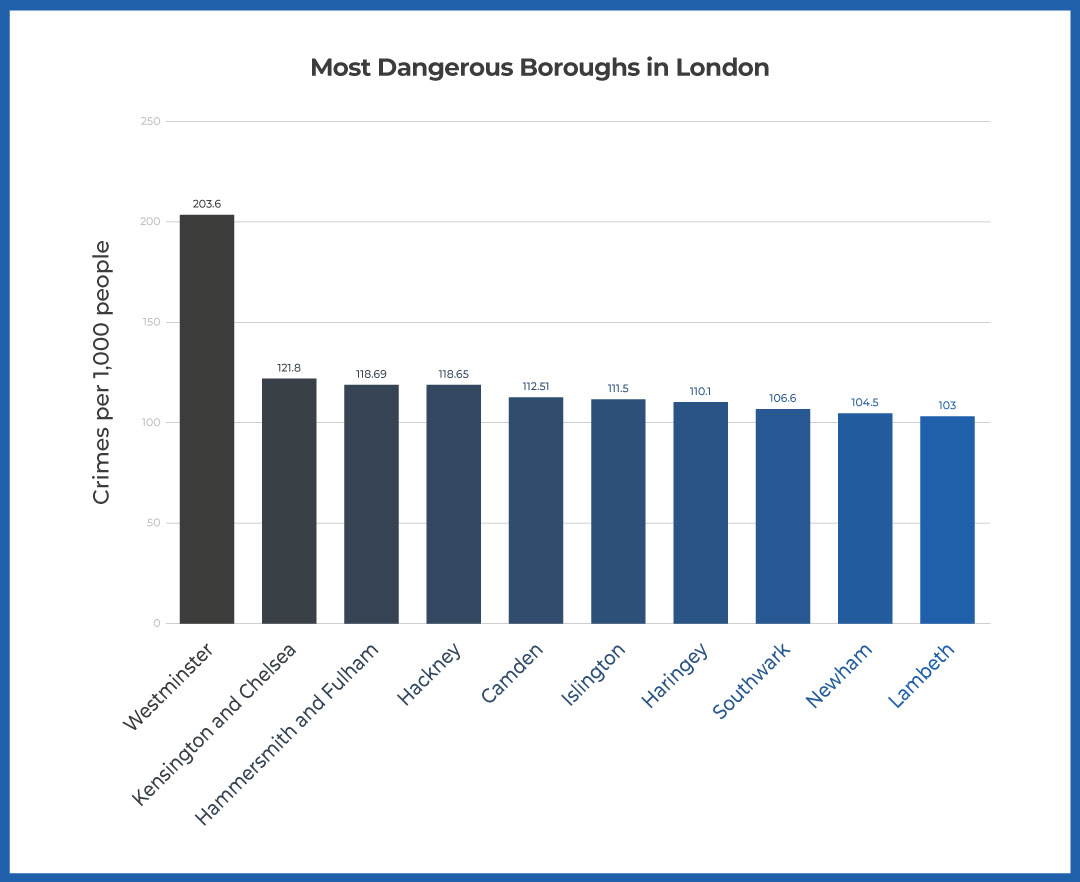 The geographic centre of London, Lambeth is a South London borough and a constituent part of Inner London. With a variety of hotels, pubs and clubs lining the South Bank, Lambeth is a popular destination for residents and tourists alike. Sadly, Lambeth also has the distinction of being the tenth most dangerous borough in London, particularly for violent crime, which constitutes a staggering 30% of all reported crimes. Theft is the second-highest crime category, with 7,807 instances of theft reported in Lambeth in 2021.

Newham is located five miles east of the City of London and contains most of the Olympic Park (including the London Stadium), as well as London City Airport. The borough contains a large number of places of interest and is home to Queens Market, Green Street, Stratford Centre, Stratford Circus Arts Centre, Gallions Reach Shopping Park and Theatre Royal Stratford East. But, with 36,813 crimes committed in the area last year, Newham comes in ninth place on our list. The most common crime occurring in Newham is violence against the person, with 10,668 instances reported in 2021. Theft offences are also high in Newham, representing around 25% of all crimes.

Situated in central London on the south bank of the River Thames, Southwark lies in the heart of the city and is connected to the City of London via several bridges including Tower Bridge and Southwark Bridge. Southwark is home to some of London’s most popular attractions, including Shakespeare’s Globe Theatre, Tate Modern and Borough Market, as well as London’s tallest skyscraper, the Shard. Southwark is a popular destination with tourists and locals alike, attracting large numbers of visitors each year, as well as criminals looking to exploit crowds. Theft accounts for around 28% of reported crimes and is the most popular crime category, closely followed by violence against the person at 26%.

Bridging the divide between Inner and Outer London, Haringey is located in North London and is a largely residential borough comprised of 22.5% green space, including Finsbury Park and Highgate Wood. Home to football club Tottenham Hotspurs and attractions such as Alexandra Place and Bruce Castle, Haringey is also a popular destination for tourists- and sadly, criminals looking to exploit this, with 110.1 crimes committed for every 1000 people. When it comes to the individual crime categories, Haringey has a high rate of violence against the person, constituting 28% of all crimes reported in the borough. Other frequent crimes in this borough are theft (19%), vehicle offences (16%) and burglary (7.9%).

The second smallest borough in London, Islington covers an area of just 5.74 miles. Situated in Inner London, Islington is predominantly a residential area with a strong service sector. The borough of Islington is also home to two universities: London Metropolitan University and the University of London, and its fair share of student accommodation. It also comes in sixth on our list of most dangerous boroughs for its high rate of theft, as well as violence against the person, which represent 29% and 26% of all crime in Islington respectively.

Situated in inner London, this northwest London borough is a famous tourism hotspot thanks to fashionable street markets, music venues and strong associations with London’s thriving alternative culture. Some of the city’s most famous landmarks are located in Camden, including The British Museum, the London Zoo and Camden Market. Despite being popular with tourists, Camden also has a dense population of around 270,000 residents– and the fifth-highest crime rate in London. With 29,853 crimes reported in 2021, including 9,301 thefts, 8,751 violent crimes and 2,784 burglaries, Camden ranks in fifth place in this year’s ranking.

Hackney is located in inner London, covering part of East London and North London. Popular with millennials, Hackney was one of the boroughs which played host to the 2012 Olympics and is known for its green spaces and recent gentrification. Hackney is also home to the Victoria and Albert Museum, the Hoxton and Petticoat Lane markets as well as the famous Hackney Empire theatre, making it popular with tourists and residents alike. Despite the recent developments in the borough, it still has one of the highest crime rates in London, with a total of 33,337 crimes reported in 2021, 26% of which were violence against a person.

Home to most of the West End, St James’s Palace, Buckingham Palace, Oxford Street and Regent Street, the borough of Westminster represents the heart of the city and all things quintessentially London, including some of Britain’s most iconic landmarks; the Houses of Parliament, Westminster Abby and Buckingham Palace just to name a few. It also happens to have the highest crime rate per 1000– for the 5th year running. A popular area for residents and tourists, Westminster is a densely populated borough interspersed with green spaces and parks. Unfortunately, tourists are frequently targeted by thieves and pickpockets, with 40% of crimes committed in Westminster categorised as theft. With an overall total of 51,383 crimes reported in 2021 or 203.6 crimes per 1000 people, Westminster is the clear frontrunner on our list of the most dangerous boroughs in London.

If you have a business in London, you may be nervous about the higher crime rates. If you’re looking for a professional security company to safeguard your people, property, and assets, get in touch with Churchill Support Services today. We can offer a range of security solutions to provide the protection you need.

If  you are looking for a security company in London Churchill Support Services is a leading cross-industry security company, delivering professional and comprehensive security solutions and electronic systems to businesses across the UK.

To find out more about how Churchill Support Services can protect your business, get in touch with us today.

John has a proven track record for motivating and leading high performance teams and has helped mentor and develop many people at Churchill who now hold key or senior positions within the business. John is committed to delivering only the finest services, exercising compelling leadership, maintaining good internal morale and striving to resolve any challenges efficiently and effectively.

Previous Article The Complete Guide to Festival Security July 27, 2022
Next Article The Impact of Crime and Corruption in the Construction Industry August 15, 2022