Assessing the Impact of Drones on the Security Industry

In the past few years, it’s safe to say that drones have really taken off. Whether it’s the heavy-duty military drones or the cheaper, yet still impressive, recreational models, you’ll no doubt have heard of these high-tech, flying computers.

Whilst consumer drones are popular with tech enthusiasts and photographers, industries across the UK are increasingly deploying drone technology to drive efficiency, gather data and improve safety. There may already be a buzz around drones, but experts predict this will only increase in the coming years. A study carried out by PWC estimates that there’ll be 76,000 drones in use in the UK by 2030, saving businesses an impressive £16bn and making a £42bn impact on the economy.

Beyond this general application, drone technology is set to have an impact on one industry in particular: security. Whilst drone and unmanned aerial vehicles have been used in the military and police for decades, they’re now finding increased application in the private security sector.

In this article, we’ll be assessing the impact of drones on the security industry, as well as the pros and cons of this technology.

For those of you who’ve heard of drones but aren’t sure exactly what they are, let’s start from the beginning. In its most basic sense, a drone is anything that flies but doesn’t have a pilot. Most of the time they’ll have a camera or computer system installed, giving a comprehensive, aerial view by transmitting images to the controller on the ground.

The quality and technology of the drone often depend on its intended usage, with military drones obviously better equipped than the consumer models available online. They’re also subject to different restrictions and legal requirements.

Whilst drones are both fun for individuals and useful for businesses, they’re not without problems. In the hands of inexperienced operators, they can even be dangerous. In 2016, there were over 50 reported incidents where a drone had almost hit an aircraft. Since then, the use of drones has become much more regulated in the UK, with a Flyer ID and/or Operator ID needed to pilot drones over a certain weight.

For businesses looking to deploy a drone, you’ll first need authorisation from the Commercial Aviation Authority. To apply for this licence, you’ll need your prospective operator to complete a CAA approved assessment that requires;

If you’re interested in finding out more about the restrictions and requirements for drone operations, visit the CAA website here. 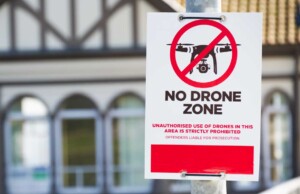 Are Drones used in the Private Security Industry?

With at least 40 UK police forces now using drones, this technology is proving to be successful and efficient at providing surveillance data. As such, we’re starting to see them appear more and more in the private security industry.

An IFSEC Global study found that around 16% of security respondents are already using drone technology, with 60% either already using drones or planning to do so in the future. And it’s easy to see why; drones can offer a quick and comprehensive view of a site, not only helping with patrols but also helping to determine the level of threat before sending in officers.

Recognising the increasingly significant role that drones will play in the future, the Security Industry Authority has outlined the licensing obligations when implementing this technology. The drone camera can be used to simply watch a site/property live or to record footage for later. This is likely to fall under the definition of public space surveillance (CCTV) activity, meaning you’ll need a Public Space Surveillance (CCTV) licence and most likely an SIA licence to carry out these activities.

So what are the benefits of using drones in the security industry? We’ve briefly mentioned some of their pros, but let’s take a closer look.

With the ability to direct a drone far and wide from the ground, this technology makes it easier to carry out remote patrols of a site or property. The camera attached to the drone will be able to capture high-quality, real-time footage, as well as offering the option to record video. With the right training, drones are fairly easy to manoeuvre and can be used to navigate around a site or property to monitor for intruders or suspicious activity.

For vast or hazardous areas such as construction or industrial sites, drones can provide visual coverage where officers, patrol vehicles or static CCTV cameras cannot. With the ability to cover vast areas from the sky, drones can easily provide comprehensive coverage and ensure that every inch of a site or property is protected from intruders or criminals. They’re also never slowed down by rough terrain and can get closer to hazards, such as high voltage areas, than security officers, helping to provide security whilst protecting security staff.

Program Routes or Control With Operators

Drones can be operated two ways; either directly with the control console by a qualified operator or pre-programmed with a set route. When a drone is operated directly, it gives the controlling officer the freedom to monitor the site and examine suspicious activity more closely if required. The pre-programming, however, allows you to have a constant route that’s monitored by a drone and requires no manual operation from a security officer. This ultimately allows flexibility to deploy manned and unmanned options.

With the ability to provide ariel images and real-time footage, drones can help security providers assess the risk level of an area or situation before they send in security officers or engage with the police. This helps to protect security staff, ensuring that they are fully briefed on the situation and that they have the appropriate equipment and backup to safely tackle the incident. Drones can also be used to assess levels of damage in cases of vandalism, ensuring any pressing repairs are identified and addressed.

Ultimately, many security companies, and businesses across all sectors, are drawn to drones because of the savings they could represent. Drones have the ability to provide high-quality images and video footage of vast sites, which helps to bring all the benefits listed above.  It could also mean that fewer on-site security officers are needed to protect a site or property, ensuring that full security monitoring is provided- for a fraction of the cost. 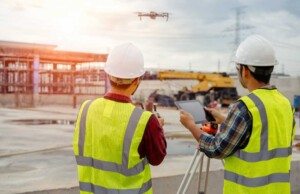 Cons of Drones in the Security

Whilst there are clearly many pros to using drones in the security industry, they’re not without their setbacks. There are some cons that need to be considered:

Like any technology, drones can be susceptible to interference, in the form of both natural signal dropout and malicious attacks. A drone and controller communicate via radio waves, which can weaken as the distance between the two grows, as well as drop out altogether due to interference. This can interrupt a mission (some drones will automatically return if the signal drops out) or even cause the drone to crash. In addition to this, drones can also be vulnerable to hackers, who attack the central control system to take over control of the machine. This, of course, poses a security risk and means that a site or property will become vulnerable.

Given that drones are airborne, there’s always a risk of collision with other flying objects, buildings and power lines, as well as animals. This could negatively impact both parties involved, causing damage or harm to property, wildlife and maybe even human life. Restrictions on drone usage are there to minimise the risk, requiring operators to avoid certain areas and heights, as well as requiring them to have a licence. But this doesn’t mean that drone accidents still don’t happen.

One of the most pressing limitations for using drones in the security industry is limited battery capacity. Like most devices, drones are powered by a battery. This enables them to fly, as well as record and transmit data. Many commercial available drones still have a limited battery capacity, however, with most consumer drones having a flight time of about 30 minutes. This short battery life means that charging will have to be factored into any security plan.

In order to operate drones safely and legally, a trained and licensed operator is needed. Since using drones is a relatively new area in the security industry, many companies will lack the skills and licensing to operate drones as part of their security offerings. Suppliers will need to either cultivate the skills for themselves or wait till the market for security drones expands.

There can be issues with signal and sending data when the drone is in flight. Not everywhere will have a signal to send data to the controller and the drone may have to first fly to areas where a signal is available in order to transmit data to officers on the ground.

Whilst we don’t offer drone security just yet at Churchill Support Services, we do employ a range of sophisticated security technologies to help protect businesses from crime.

Here at Churchill Support Services, we can equip your site with a CCTV system that works for you. With a reliable CCTV solution keeping watch over your property, you can benefit from hassle-free security with 24/7 monitoring, as well as a rapid first response platform.

No matter the type of site, we’ll work together with you to create a comprehensive and effective CCTV plan that maximises camera coverage and reduces blind spots so there’s nowhere for criminals to hide. We’ll continue to support your CCTV solution with servicing and maintenance, ensuring it can continue to protect your site, now and into the future.

Door entry systems are fast becoming a safer alternative to the traditional lock and key systems. Allowing multiple levels of access to restrict entry to unauthorised personnel, door entry systems can dramatically increase your security. With keyless entry, there’s no need to replace a full locking system if a key is lost or stolen because key cards can easily be deactivated. It’s simple to manage access and view room entry information with any internet-enabled device, helping your business save time and money.

Our system is designed to monitor how many people are entering and leaving a specific area, ensuring areas with limited capacity never become crowded and unsafe. With its simple setup and

operation, our People Flow solutions can be quickly deployed to provide vital crowd control for these essential facilities.

Our cameras use advanced AI technology to track and monitor the continuous flow of people, as well as keeping an up-to-date track of the flow of the people entering and exiting. The system can be set to your specific restrictions, allowing you to choose the maximum occupants and the entrance you wish to monitor.

To find out more about how Churchill Support Services can support your business and its operations, get in touch with us today.

John has a proven track record for motivating and leading high performance teams and has helped mentor and develop many people at Churchill who now hold key or senior positions within the business. John is committed to delivering only the finest services, exercising compelling leadership, maintaining good internal morale and striving to resolve any challenges efficiently and effectively.

Previous Article The 10 Safest Places to Live and Work in the UK October 1, 2021
Next Article How to Run a Safe and Successful Event November 1, 2021