The 10 Safest Places to Live and Work in the UK

Every town, city and county has areas with a higher or lower risk of experiencing crime. Whether you’re a business or homeowner, the cost of crime can be high, not just emotionally but also often financially, leaving you feeling stressed and vulnerable in your home or place of work.

As is often our approach here at Churchill Support Services, we believe that knowledge is power when it comes to protecting yourself. It’s therefore a good idea to know the crime rate in your area, as well as the most common types of crimes. This can help you to plan better for the future, ensuring you have the right security measures in place to protect yourself, your property and your assets.

We’ve taken data from ONS to rank the safest places to live in the UK; safest because we’re looking at the regions with the lowest rate of crime per 1000 people. Why per 1000 people? Well every area has a different population, so comparing the crime rate proportionally helps to give us a crime rate that’s relative to the population.

You can check out the original data here, as well as a further breakdown of those crime statistics. So, let’s jump right in and take a look at the top 10 safest places to live in the UK: 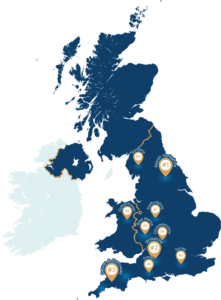 Despite being the largest non-metropolitan county in England, North Yorkshire has the lowest crime rate at 47.5 per 1000 people. With the total recorded crime rate in England and Wales at 77.6 per 1000 people, North Yorkshire is considerably ‘safer’ than the national average, not only in total crime but also across the individual crime categories.

Compared to the other areas that make our top 10 ranking, North Yorkshire ranks the lowest for violence against the person at just 19.1 incidents per 1000 people, but slips down the scale for drug offences, coming in at sixth place with 2.3 per 1000.

Located in the South West of England, Wiltshire is a rural county best known for its high downland and the Salisbury Plain. On our list of the safest places to live, it comes in second, undercutting the national crime average by 26.9 crimes per 1000 people, but narrowly beating out Devon and Cornwall by 0.3.

Out of the 10 places on our list, Wiltshire ranks the lowest for criminal damage and arson, as well as coming in second lowest for residential burglary. In terms of highest crime ratings, Wiltshire comes in seventh for Robbery, drawing with West Mercia at 0.4 crimes per 1000.

Although they’re two separate counties, their joint police force means that the crime stats encompass both Devon and Cornwall. Despite being two counties in one, Devon and Cornwall is still the third safest place to live in the UK, with a crime rate 26.6 lower than the national average of 77.6.

Devon and Cornwall actually ranks lowest in two categories; residential burglary and theft offences, beating out even our ‘safest’ ranked area, North Yorkshire, in these areas. It ends up in third place overall, however, because of higher crime rates in categories such as non-residential burglary, drug offences and criminal damage and arson.

Located in the South East of England, Surrey is the third-most-populous home county and the fourth ‘safest’ place to live in the UK, with an average of 55.6 crimes per 1000 people. In terms of the individual crime categories, Surrey has its highs and lows.

Like Devon and Cornwall, West Mercia compromises several counties (Herefordshire, Shropshire and Worcestershire) into one territorial police force and despite this, is still the fifth ‘safest’ area in the UK, with an average of 56.5 recorded crimes per 1000 people.  West Mercia ranks low for both drug offences and criminal damage and arson, coming in third and second out of our 10 safest areas respectively.

Compared to the other entries on this list, West Mercia has some of the higher crime rates for categories such as residential burglary, with the highest rate of shoplifting out of our 10 areas- on par with the national average at 3.8.

Gloucestershire narrowly misses out on a spot in the top 5, coming in at sixth place for the ‘safest’ place to live in the UK. Yet another entry in our ranking for the South West, the county Gloucestershire covers the city of Gloucester, as well as the towns of Cheltenham, Stroud, Tewkesbury and Dursely.

Diving into the statistics, Gloucestershire ranks quite high in the individual crime categories, with the highest crime rate for robbery, as well as the second-highest for residential burglary and theft offences, out of our other top 10 rankings. The Shoplifting rate is also aligned with the national average of England and Wales at 3.8 recorded offences per 1000 people.

Another entry on the list for the Midlands, Staffordshire makes our 10 safest places to live, with a crime rate of 59.4 per 1000 people, 18.2 lower than the national average crime rate. Encompassing the market towns of Stafford, Burton upon Trent and Newcastle-under-Lyme and many more, Staffordshire is at the higher end of the rankings for some of these crimes categories such as robbery, theft offences and violence against the person. On the flip side, however, Staffordshire ranks the lowest on our list for drug offences with 1.4 incidents per 1000 people, compared with the national average of 3.5.

Yet another entry for the South West, Dorset comes in eight on our list of the 10 ‘safest’ places in the UK. Dorset is the first place on the list to pass the 60 recorded crimes mark, yet is still 17.6 lower than the England and Wales national average.

Dyfed-Powys is the only Welsh entry on our list, coming in ninth place. This is another territorial police force that covers Carmarthenshire, Ceredigion and Pembrokeshire but still has the ninth-lowest crime rate in the UK, despite being three areas in one. When it comes to the individual crime categories, Dyfed-Powys has its highs and lows. The lows include the lowest crime rate on our list for robbery and shoplifting. It still ends up only ranking ninth, however, due to high crime rates in other areas, including meeting the national average for violence against the person, as well as surpassing the national average for drug offences.

The last entry on our list goes to Cumbria, which narrowly missed out on ninth place by a mere 0.4 crimes per 1000 people. After spending so much time down south during this ranking, we’re now back to the North West. In terms of the stats breakdown, Cumbria ends up rather middle of the road in all crime categories but stands out for its high criminal damage and arson rate- which is higher than the national average by 0.5, as well as ranking in second-highest for violence against the person.

Live In One of These Areas? Don’t Take Your Safety for Granted

If you’re fortunate enough to live in a low crime area, you shouldn’t take your safety and that of your business for granted. Anyone can become a victim of crime; whether that’s vandalism, theft or violence.  As we’ve seen time and time again on our list, areas that rank low for some categories of crime, rank high for others. Ensuring your business remains protected with professional security is essential, so why not consider the following services?

Whether you’re existing CCTV needs updating, you require proactive monitoring solutions or you’re looking for an entirely new system, we can help your organisation achieve its security objectives with our expert advice and CCTV services.

To support your CCTV installation, our specialist security technicians can carry out a full assessment of your site to establish the best installation strategy for you. With a state-of-the-art CCTV facility monitoring your premises 24 hours a day, you have peace of mind that any criminal incidents will be confronted swiftly and effectively by our security professionals.

Our alarm response security team possesses the necessary experience and expertise required to effectively respond to alarm activations of all types – this includes the use of physical intervention techniques, making minor repairs (for example, boarding up broken windows) and ensuring adherence to security best practice in the immediate aftermath of the event.

No matter the reason why your alarm sounds, our security team will always respond as though a legitimate security incident has taken place. In the event of break-ins, thefts or vandalism, after ensuring that your premises are protected, our team will liaise with the police and other emergency services.

As a strong visual deterrent, security guarding is still one of the most proven measures to ensure the safety of your premises and personnel. Whether you need dedicated gatehouse security for an industrial facility, or you need professionals to control access to a busy corporate office, our unbeatable guards will take care of your concerns. Our wide variety of capabilities, including performing risk assessments and health and safety checks, mean we can tailor our security solutions to supply a whole range of needs.

With the ability to change between many locations and deliver services such as internal and external patrols, open-air security, as well as operating our patrol vehicles, our mobile patrols can supply security that operates across more than one fixed location.

Acting as a strong visual deterrent against would-be intruders and criminals, our patrols vastly decrease the chance of crime such as intrusion, vandalism and theft taking place on your site. Our security staff are trained to respond to a range of security situations, so if any mistrustful or criminal activity does occur you can be sure of a rapid and effective response.

Churchill Support Services Dog Handling service works wonderfully with our patrol services. Our canine operatives can patrol the perimeter of your site, acting as an effective visual deterrent and supporting our officers in securing your premises.

With their heightened senses, our security dogs assist the officers in searching buildings and in the event of an intrusion, can lock on to the scent of trespassers and locate intruders hiding across the premises. This makes our mobile dog patrol perfect for providing security across outdoor sites, larger premises or multiple properties.

If you’re looking for security services in your area of the UK, Churchill Support Services should be at the top of your list. We can provide bespoke security solutions to businesses of all types, no matter where you’re based. All our guards and officers have a full SIA licence and all the training necessary to provide first-class security across your site.

So get in touch with Churchill Support Services today. Our professional team will really get to know your business, its security concerns and needs, creating a bespoke solution for your property or site that also fits your budget.

To find out more about how Churchill Support Services can support your business and its operations, get in touch with us today.

Andy is an experienced operations and sales professional with over 20 years’ experience. As Churchill Support Services Operations Director, Andy is responsible for service delivery to new and existing clients throughout the UK, managing the 24 hour control room, the supervisory team and Operations Managers, and for driving efficiencies and best practice standards within the organisation.

Previous Article Corporate Security in London: Secure your London Business September 17, 2021
Next Article Assessing the Impact of Drones on the Security Industry October 18, 2021